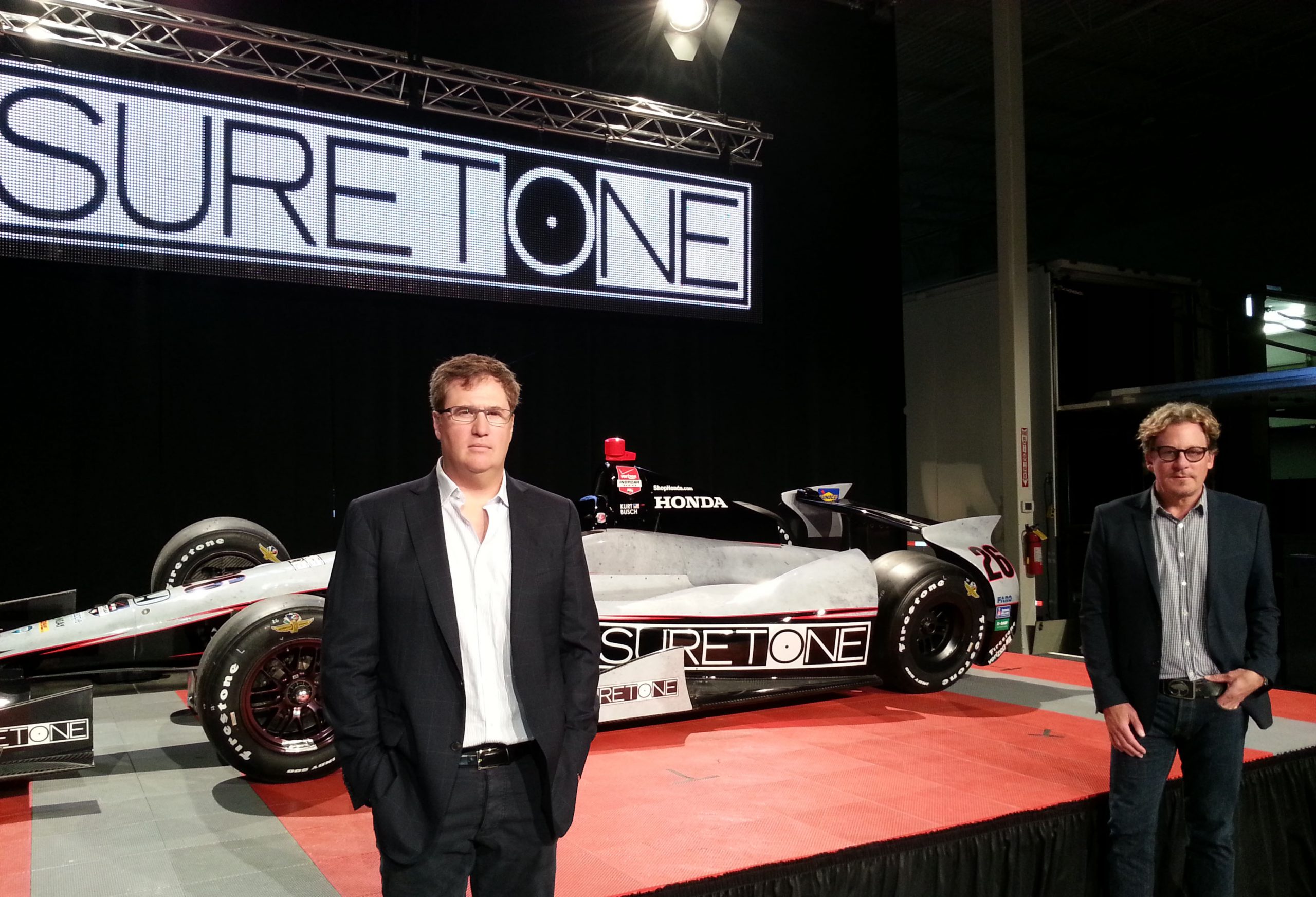 Cinsay, the world leader in social video commerce, and Suretone Entertainment, the premiere music management firm and record label, have announced a multiyear exclusive agreement to launch a new global music entertainment portal, SuretoneLive.com. The new online venture will host music, video, merchandise, pay-per-view, exclusive content from concerts and festivals and allow for social interaction between artists and fans around the globe as they watch, shop, and share™.

“We’re very excited to announce this partnership with Cinsay and to leverage the world’s only multi-patented video ecommerce platform for venues, festivals and artists worldwide,” said Jordan Schur, founder and Chairman of Suretone Entertainment.

“This new site will take the entire music industry into a new direction that resonates with both fans and artists and is a tremendous opportunity for musicians to not just monetize their craft but to also expand their reach globally and connect one-on-one with their fan-base,” added Co-Chairman Carl Stubner.

Suretone Entertainment has been home to well known and successful acts such as Fleetwood Mac, The Cure, ZZ Top, Chris Cornell of Soundgarden, Weezer and dozens of other multi-platinum hit artists. SuretoneLive.com will include the vast library of music from Suretone’s history as well as new content featuring interviews, music festival footage, behind-the-scenes clips, HD music videos and exclusive pay-per-view events. The site also includes exclusive branded merchandise and apparel from the bands and artists along with personalized and collectible items only available from the global music portal, which will be accessible from the web, smartphones and tablets.

SuretoneLive.com launches the game-changing global music venture at a critical time in the entertainment industry. According to eMarketer and IBIS, forecasts for continued growth in global music streaming and downloads are increasing over 12% annually and the entertainment industry already has over 28M monthly paying subscribers to multimedia content. Additionally, worldwide household spends on entertainment are predicted to rise about 2% over the next 24 months. These factors alone present a huge opportunity for Cinsay and Suretone as the partnership moves to bring the next stage of evolution to the music industry.

In 2013 at SXSW, Cinsay proved out their syndicatable model and concept of Watch. Shop. Share™ with its R2RLIVE LIVE concert, which featured over 8-hours of continuous live music streamed in HD from the Austin festival and received over 3M viewers from across the world. The event featured some of the top artists highlighted by Time Magazine, Teen Vogue and Fuse Music Television such as Skylar Grey, Warren G, P Diddy, KITTEN, and the Ton Tons.

“The ability for festivals, events and artists to host music and for fans to watch, shop and share their music and engage with each other is exciting. This is the type of platform and opportunity artists have been waiting for,” said Mick Fleetwood, Founder of Fleetwood Mac.

“SuretoneLive is the culmination of everything that both fans and artists want. We’ve been waiting for a new experience – well, here it is!! Sync your teeth into the REAL DEAL!!” said Billy Gibbons of ZZ Top.

Fans will have the ability to watch, shop and share content for free. For additional and exclusive content, audiences can choose from several levels of musical entertainment. Shows will be underwritten by sponsors as well as by targeted advertisements and also feature additional options for fans to join a monthly subscription with additional HD video available via exclusive live Pay Per View for special VIP events.

“Everyone in the world loves music and that’s why this partnership is so exciting,” said Christian Briggs, founder and CEO of Cinsay. “For those fans that can’t make it to a concert or festival, SuretoneLive will be there to bring them the live experience in their home via Smart TV, to their computer or all mobile devices and shareable to anyone, anywhere and at anytime. They’ll get to interact with other fans, see exclusive footage, which no one at a festival can see, and even walk away with a t-shirt or hoodie after the event all on mobile. That’s about as virtually-real as it gets!” Briggs added.

Kicking off this global music launch, Suretone Live is making its debut at this year’s Indianapolis 500 race as the title sponsor for the Andretti Autosport team’s driver Kurt Busch. NASCAR legend Busch will make his attempt to race two major competitions on the same day. Both the IndyCar 500 and NASCAR’s Coca-Cola 600 will demand 1,100 miles of driving. This is the first time in over twelve years such a feat has been attempted. Busch qualified on Sunday’s Pole Day for row 4 for the drop of the checkered flag.

Cinsay will also be competing with their AndrettiTV branded title sponsorship car no. 34 of the Andretti Autosport team and driven by Carlos Muñoz who qualified on Sunday for the inside of row 3.

“These are exciting times. SuretoneLive and Cinsay can compete in one of the world’s most famous races all while partnering together to bring change to the music industry and establish a better entertainment solution for both artists and fans,” added Briggs.

The music site will soft-launch in mid-July 2014 where fans can sign up for free and begin viewing and sharing hundreds of music videos, and song tracks while shopping for merchandise. Over the following weeks and months, subscribers can begin enjoying even more selections as the site builds out more video content and exclusive features.

Jordan Schur founded Suretone Records in 2006 after his successful tenure of almost a decade as President of Geffen Records at Universal Music Group where he merged the original Geffen Records with MCA Records and DreamWorks Records – generating over 2B in sales. Schur has worked with some of the world’s most successful artists ranging from Nirvana, Guns N’ Roses, Snoop Dogg, Mary J Blige and Blink 182, to name a few. Schur started his career in music with his original company Flip Records, where he sold over 70M records launching artists such as Limp Bizkit and Staind.

Suretone Entertainment has grown into a broader company over the last 8 years that included the joining of Co-Chairman Carl Stubner, and expanded as the company dove into film development, financing, and production, as well as music artist management, along with its original record company history where artists such as The Cure, Weezer, Chris Cornell, Angels & Airwaves, and Shwayze all found great success. Suretone management roster clients currently include Fleetwood Mac, Lonestar, Indie.Arie, and ZZ Top. Carl Stubner joined Suretone Entertainment from his previous position as CEO of Sanctuary Music Group Worldwide in partnership with Universal Music Group, where Stubner spearheaded great success for his roster of artists that included many of the world’s most successful acts.

Schur has also enjoyed a successful run as a film producer, having produced and financed films including the highly regarded Stone, starring Robert De Niro, Edward Norton, and Milla Jovovich, as well as the much-heralded ‘Warrior’, starring Tom Hardy, Joel Edgerton, and Nick Nolte, and which garnered an Academy Award nomination. Schur also produced the critically acclaimed Henry’s Crime, starring Keanu Reeves, James Caan, and Vera Farmiga, and as well produced and financed with Lionsgate the film ‘Rapture-Palooza’, the youth based comedy starring Craig Robinson and Anna Kendrick, which was released last summer. Schur in 2012 founded Suretone Pictures, where he has since released several notable films, including last summer’s ‘Pawn Shop Chronicles’, which starred Paul Walker in one of his last films before his unfortunate passing, as well as Elijah Wood, Brendan Fraser, Matt Dillon and others. Suretone Pictures current slate of films in development and production include the upcoming ‘Five Against A Bullet’ in partnership with Sony/Columbia Pictures, as well as ‘Revenge Wedding’ in association with Lionsgate.

Austin-based Cinsay has created a next-generation e-commerce, viewer interactive, video-based platform for any size business. Cinsay’s technology enables anyone to sell products, display printable coupons, capture donations, and generate leads all inside its multi-patented Smart Store™ technology. Along with being the premiere video commerce provider for small and medium businesses, Cinsay is adding new exclusive content channels for sports, music and movies aligned with partners including Andretti Autosport and Suretone Entertainment.

Forbes named Cinsay one of “America’s Most Promising Companies” while eTail Conferences named Cinsay a “Rising Star in innovation” for 2012. Red Herring also selected Cinsay for the “Top 100 Companies in North America” for 2014. Cinsay’s eCommerce video-based platform can be used for any individual or business.

FOR MORE INFO GO TO: