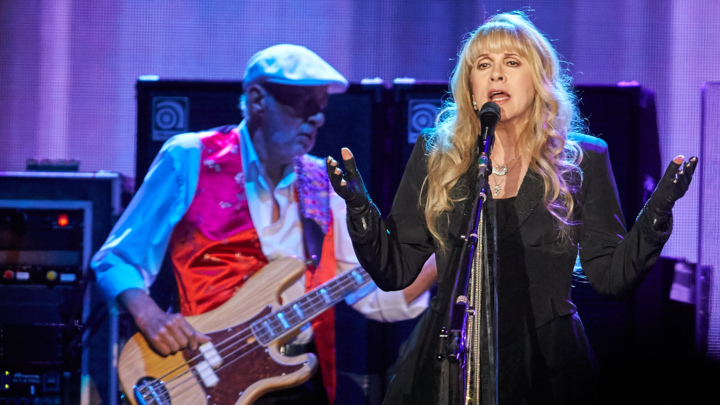 Fleetwood Mac kick off their 2014 tour at Target Center in Minneapolis, Minnesota, on September 30th, 2014.

Sixteen years of domestic life in the English countryside, playing with her dogs and baking cookies – that was apparently quite enough for Christine McVie. The singer and keyboardist rejoined Fleetwood Mac earlier this year, and, at 71, she’s touring with her old band – singer-guitarist Lindsey Buckingham, singer Stevie Nicks, drummer Mick Fleetwood and bassist John McVie – for the first time since 1997.

Fleetwood Mac have been on the road plenty in the past few years. But fans have craved a reunion of the lineup that first cohered in 1974 and went on to record that best-selling classic of tuneful romantic turmoil, Rumours. McVie’s bandmates, apparently, felt the same way: Nicks in particular had lobbied for McVie’s return, making onstage pleas and sending emails.Last night, those wishes came true, as the band opened a 33-city North American tour at the Target Center in Minneapolis. Over the course of a generous two-and-a-half-hour set, the band ripped through 24 songs from the past four decades of their career. Here are five things we learned.

Fleetwood Mac don’t stop thinkin’ about tomorrow.
If the evening had an overarching theme – and trust us, it did – it was that Fleetwood Mac remain creatively active. “This is a band that continues to evolve through good times and adversity,” Buckingham announced at one point, as though delivering a mission statement. His long introduction to “Big Love” highlighted “the power and importance of change.” And when the time came for Mick Fleetwood to introduce the members of the group, the drummer commended Buckingham’s “vision for the future of the band.” That may not just be empty talk – the group has reportedly been writing and recording new material since McVie’s return.

Lindsey Buckingham is still a talented weirdo.
Buckingham certainly did command the stage with the authority of a band leader. His wiry intensity makes him both charismatic and uncool – a winning combination – and with his shock of gray hair and his T-shirt and sports jacket outfit, his look is “chic English Lit professor.” After bringing home a performance of “Tusk,” he stomped on the stage as though he’d just completed a successful touch football play. His playing, meanwhile, remains fluid and effortless: Of course he nailed the tricky guitar parts you recognize from the records, but he also cut loose on an extended freak-out during “I’m So Afraid,” climaxing in a flurry of intricate hammer-ons and crowd-pleasing heroics.

Stevie Nicks is the earnest and effusive heart of the band.
Look, a 66-year-old just can’t whirl about the stage in a transported frenzy, no matter how close a contact she maintains with the spirits of the netherworld – it’s an inner-ear thing. So Stevie’s witchy gesticulations are subtler now, maybe a little hesitant, definitely more deliberate, yet still plenty captivating once she donned an appropriately-colored shawl for “Gold Dust Woman.” Most importantly, she’s not ashamed to gush, praising both the crowd and Christine: “We are all the dreamcatchers, and we got our dream girl back!”

There’s a reason they’re named for the rhythm section.
From the kick on “The Chain” to the cowbell on “Gold Dust Woman,” so many of these hits are instant recognizable because of their drum parts, and Fleetwood and McVie remain the engine that keeps Fleetwood Mac on track. John McVie is as quietly spotlight-avoidant as ever, the kind of guy who stays in the living room reading the paper when company comes over. But age has only heightened Mick Fleetwood’s air of good-humored Dickensian menace – “For sure,” he shouted to the crowd, “the Mac is back!” For the encore, he even hauled off on a good old-fashioned drum solo, just like you used to hear on side three of double-live LP back in the Seventies.

Christine McVie is so necessary.
Without her, of course, there’s no “You Make Loving Fun,” no “Say You Love Me,” no “Over My Head.” But those aren’t just great songs – they’re expressions of a homey yet sexy sensibility that balances off Nicks’ supernatural romanticism and Buckingham’s passionate exasperation. McVie struck a confident presence behind her keyboards, reminiscing about the “fugly little flat in Malibu” she and John once shared and expressing her happiness to be back with the band. “Our songbird has returned,” Fleetwood announced grandly when introducing her – and, appropriately, McVie closed the night with  the simple, lovely “Songbird.”