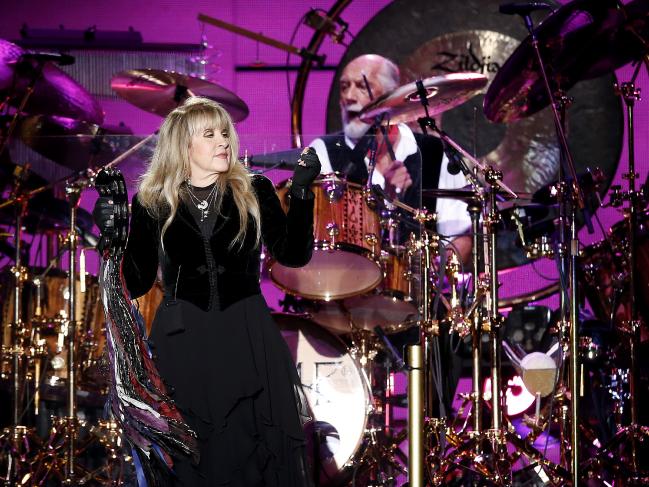 FEW bands have been through as much as Fleetwood Mac and lived to tell the tale.

They took the ’70s ethos of sex, drugs and rock ’n’ roll to its limit, with the sex and the drugs threatening to end the rock ’n’ roll on more than one occasion.

Perhaps that’s why Wednesday night’s show at Coopers Stadium had such a feel-good vibe – the Mac are like a dysfunctional family who’ve had some therapy, buried the hatchet and turned up for Christmas lunch with smiles on their faces. And the family finally felt complete, with songwriter/keyboardist/vocalist Christine McVie back where she belongs after 16 years away from the band.

“This is quite an auspicious occasion,” McVie told the full stadium. “I haven’t been to Adelaide for 30 years.”

The crowd welcomed her with open arms – her voice and her songs are a vital piece of the Fleetwood Mac puzzle.

McVie looked effortlessly cool behind the keys, standing at the right hand of former husband and bass player John McVie who was, together with mercurial drummer Mick Fleetwood, rocking the “Morris dancers on acid” look. Stevie Nicks was front and centre, the eternal waif, and next to her was guitarist and vocalist – and former lover – Lindsey Buckingham, looking youthful and handsome in jeans and a sports coat.

The night began with The Chain, the stomping country rock anthem from Rumours, and from there on it was just a cavalcade of hits – Dreams, Rhiannon, Everywhere, a brilliant rendition of Tusk complete with a big-screen remix of the iconic marching band film clip, Sara and Say You Love Me, a song that showed off the McVie-Nicks-Buckingham harmony machine to full effect.

After that the band went off for a well-deserved breather while Buckingham laid down a truly beautiful solo version of Big Love. His guitar playing is a breathtaking mix of folk-styled fingerpicking and rock riffing, and his voice cut through the warm night as a full moon rose over the stands.

The band came back on for Landslide, and we got the first of Mick’s drum solos on Think About Me, before Nicks told the story of the inspiration behind Gypsy (it’s about an expensive San Francisco dress salon, Janis Joplin, and the moment she knew she was going to be a famous singer). I’m So Afraid saw Buckingham wowing with his guitar antics once more before the main set closed with a rousing rendition of Go Your Own Way that had the crowd on its feet and singing along (and one lady in the front row filming on an iPad. Get a phone, lady!)

There was an encore – that’s a given – and it started with World Turning complete with a five-minute Fleetwood drum solo/comedy routine, followed by Don’t Stop and Silver Springs. The night wound up, fittingly, with Christine McVie on a grand piano singing Songbird, accompanied by Buckingham on an acoustic guitar.

The applause was heartfelt, and the band genuinely seemed to appreciate it. The final word went to Fleetwood, the giant ringmaster, who thanked the fans for their support over almost five decades and implored everyone “in this seemingly crazy world that we live in” to “take such very good care of one another”. Yeah, Mick!