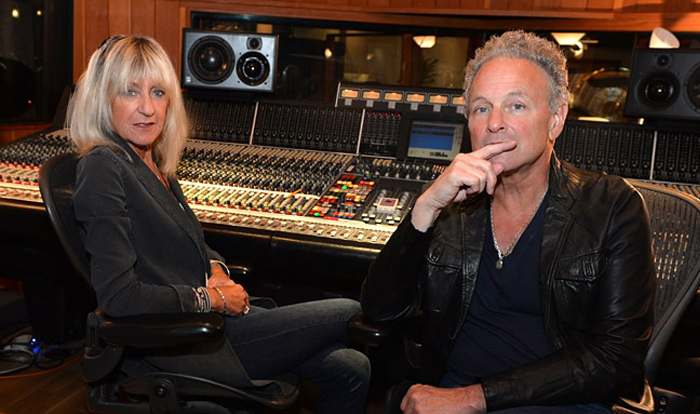 Lindsey Buckingham and Christine McVie talk about collaborating ahead of the band’s upcoming tour. “We’ve been working very closely together, so there is a freshness”

It appears that Christine McVie will be returning to Fleetwood Mac to do more than play some old songs in concert. The group — sans Stevie Nicks, who was busy with “some other commitments,” according to Lindsey Buckingham — has just finished a nearly two-month run in Studio D at the Village Recorder in Los Angeles, where Fleetwood Mac made 1979’s “Tusk” album, working on a batch of new songs by McVie and Buckingham.

“This has kind of been a project in slow motion, that’s the only way I can put it,” Buckingham tells Billboard. “We got in the studio not knowing what to expect, and the chemistry was just unbelievable… We got eight tracks very far along, like, 75 percent done. It just played out really organically in a way that seemed appropriate.” Buckingham says the new songs came from ideas McVie brought into the band, and coupled with material he worked on previously with Mick Fleetwood and John McVie, the group has “about 14 or 15 things, and some other things we want to get to down the line” even before Nicks begins making contributions.

“We’re all very excited about it. Knowing me, I’m going to be pushing for a double album,” Buckingham says with a laugh.

Describing the new songs — which include “Carnival Begin,” “Red Sun” and “Too Far Gone” — McVie says, “There’s a wide variety, starting from sort of blues-based songs to very commercial songs. It’s very, very exciting. We get chills when we hear them. They sound really fresh. There’s an element, I guess, that hasn’t really existed so much in the past although it has been there in the fact Lindsey and I have been collaborating more. We’ve been working very closely together, so there is a freshness and obviously there are parts for Stevie to sing on all of these songs, which she will do eventually.”

When the rest of the world hears them remains up in the air, however. Fleetwood Mac released a four-song digital EP in April of 2013, and Buckingham and McVie say they don’t expect to have a new album ready before the group’s upcoming tour starts September 30 in Minneapolis.

“We haven’t finished what we’ve done here,” McVie explains. “these are just tracks with some overdubs, and they’re certainly not finished. I go back to England now until the beginning of rehearsals, which is the end of July, and then we’re rehearsing and then we’re touring, so we won’t really have time to (finish the songs). There’s some talk about some time next year. Fleetwood Mac always take a long time to make a record — you know what.”

Buckingham concurs, though he acknowledges that there may be a bit of clamor for the new music once word of the sessions leaks out, which may effect the timetable for the material’s release. “We want to plant some seeds of awareness about what we’re doing,” he says. “We won’t want to pretend it doesn’t exist. We’re very proud of it, and we do want to get the word out. But we’ll have to see how much clamor there is by the time we get into rehearsal and we have some time to let these seeds grow and see what kind of interest there is. That may inform our decisions one way or the other.”

Buckingham, meanwhile, says he’s particularly stoked that making new music is part of McVie’s return after a 16-year absence. “It just took on a life of its own for sure,” he says. “For years I was telling everybody, ‘Y’know, she’ll never be in the band again. She’s gone.’ I really believed that. But right now the whole thing has really got such a circular feel to it. And if you’re talking about one more act for this play or whatever you want to call it, I can’t think of a better way to do it.”

Fleetwood Mac formally announced McVie’s return in January after she joined the group on stage in London last September. McVie — who released one solo album, 2004’s “In the Meantime,” during the interim but mostly spent her time as “a retired lady of leisure with the Range Rover and the Dogs” in rural England — has gone through therapy to overcome a fear of flying that was one of the reasons he left the group. And she promises that she’s back in Fleetwood Mac “for perpetuity, yeah. For as long as I’m around. I’m here. I’m committed.” And she adds that returning to the studio with the group was like getting back on the proverbial bike.

“I thought I was going to get nervous coming in the studio, but it’s felt very easy and natural,” she says. “Before I got to L.A. Lindsey and I had been ping-ponging ideas on computers and that; I’d send him my very, very rough, funky demos and he made some kind of sense out of them and sent them back to me with him playing guitar and they started to turn into really lovely ideas. I really missed playing with them and the chemistry of it all and started to really, really desire to start doing something again, and the only people I could think of that I would have any desire to do anything with would be them, Fleetwood Mac.”