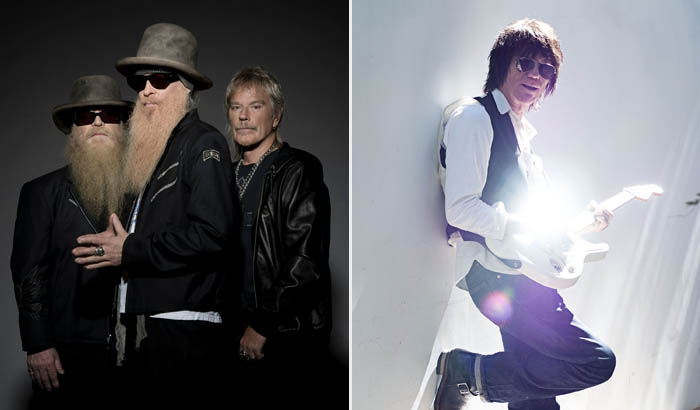 “If you recognize it as ZZ Top then we’ve had a successful expedient in sonic branding. Taste is the stuff we play, how we play it, but, more importantly, the stuff we don’t play. Tenacity of course is stick-to-it-iveness and we have been pretty good at sticking around,” Gibbons says via email.

The whiskered rock stars have stuck together for 45 years, joining the Rock and Roll Hall of Fame in 2004, with 11 gold and platinum albums, and releasing their latest album, La Futura, in 2012. The iconic band’s sound has evolved with the times, incorporating synthesizers and other harder rock elements since the ’80s, but their performance energy and love of blues remain.

“What we do is a hard, blues-based thing prompting being big believers in feeling it before dealing it,” Gibbons says. “These days, it’s combining and creating digital-to-analog files to keep things totally mixed and blended. We get into the spirits and turn it up!”

The band has the familiar sound of traditional Texas blues combined with jovial lyrics and sexual innuendos. Some of their hits that you maybe forgot you knew include “Tush,” “Leg” and “Sharp Dressed Man.” From recent performances, you can expect to hear these as well as a ZZ Top-ified cover of Jimi Hendrix, who Gibbons performed with early in his career.

After the band’s formation in 1969, ZZ Top broke out almost immediately in a word-of-mouth blaze. “We just got out there and cranked it out — essentially a non-stop groove. We didn’t even realize that our stuff was being played on the radio nationally until way after the fact,” Gibbons says.

The trio is currently on tour with UK-born guitarist Jeff Beck, formerly of the Yardbirds. Beck and ZZ Top will perform full sets and take the stage together later in the evening.