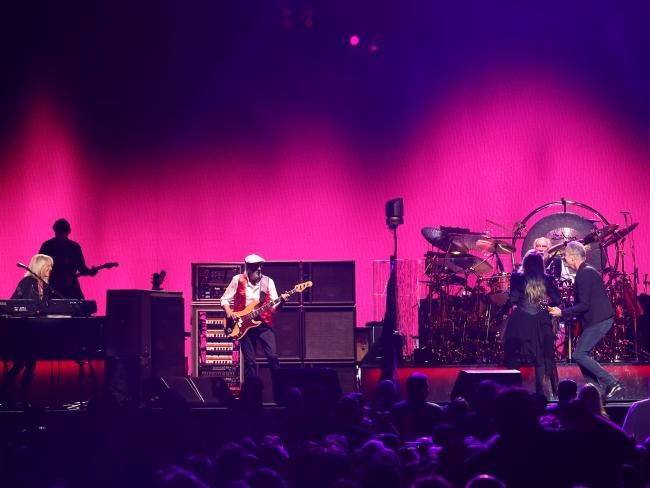 Fleetwood Mac fans cheer, laugh, cry and show love for the band on their Australian tour

IF you could harness all the energy devoted to singing Fleetwood Mac songs in lounge rooms, cars and bars over the past 40 years, it would create a mighty bang.

The audience at the opening Australian concert by the legendary band at Sydney’s Allphones Arena brought an energy powered by all those moments, whether a solo karaoke of their favourite song, perhaps Go Your Own Way, or the more universally sung-to-the-rafters Don’t Stop.

Their myth is rooted in the reality of their drug-fuelled romantic entanglements and bust-ups as documented so honestly and historically on the greatest breakup album of all time Rumours.

The Fleetwood Mac on offer in 2015 is one every fan had not dared hope for over the past 16 years; the return of the classic line-up featuring Christine McVie.

This reunion appears to have a restored a natural order, and much-missed songs, to the concert life of Mac and the band’s devoted fanbase.

Yet this isn’t a band simply running through a well-structured hits set played with the ease of familiarity and virtuosity.

There was seriously a lot of love in the room, both on and offstage, even when Lindsey Buckingham got a little creepy with his vocals on Never Going Back Again.

And it’s not only the love these five musicians have for each other, which is truly astounding when you consider how they tortured each other back on the 70s and 80s.

Where the love, and the joy and even a few tears, really happens, is in the audience.

Like the three people behind me harmonising so tunefully to the opening track The Chain, the band’s statement of intent to keep it all together for this tour, at least.

Or the enthusiastic air drummers everywhere in the crowd who played along to Tusk.

Or the big Christine fan who almost busted out of his chair space as he danced and sang along to You Make Loving Fun.

Or me who may have got something in both eyes during Sara, a song introduced to the setlist for the Australian concerts.

That’s the thing about a Fleetwood Mac concert which remains truer now than ever in those creatively and personally tense eras.

The Mac are just such a big deal to the fans, and they respect that loyalty by not messing with the memories.

Stevie Nicks twirls is her layers of black and mic stand of scarves and ribbons.

Buckingham is an engaging guitar show-off, that rare musician whose hyper emotional performance somehow remains connected to the song rather than veering too far off into an indulgent display of proficiency.

Christine just delivers that understated and warm depth she always brought to the band.

And then there’s that devilishly handsome and beguiling rhythm section of bassist John and the masterful, commanding drummer Mick Fleetwood.

The world would have been a less magical and mirthful and musical place without Fleetwood making this band all those decades ago.

What remains at the end of a night which included Tusk, Dreams, Rhiannon, Gold Dust Woman, Landslide, Big Love, Go Your Own Way, Everywhere, Little Lies and Songbird are the feeling that the songs you have always loved from one of the world’s greatest bands still sound as good as they do in your memory.

And that rarely happens.