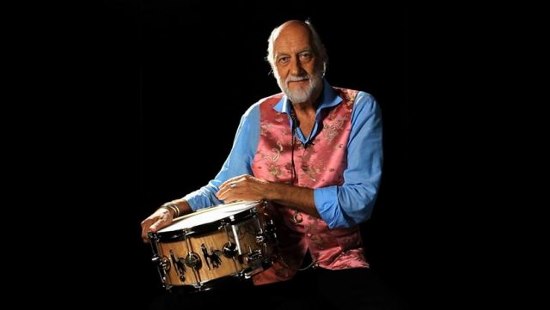 Mick Fleetwood sat down with Classic Rock Revisited’s Jeb Wright to discuss a drum.  Not drumming.  Yes, he’s a famous drum pounder and an extraordinary time keeping machine… but today, we talked about a particular drum… actually, around 250 of them.

Fleetwood has a longstanding relationship with the company DW Drums.  This is a top notch company dedicated to the craft of drumming.  They are in love with drumming… it is their obvious passion.

One of the many special things that DW will do is create drums for a special limited edition program titled the Icon Series.  A famous drummer is hand-picked and a drum is made in their honor.  Part of the proceeds is given to a charity of their choice.  In this case, the honoree is Mick and his band Fleetwood Mac, and their iconic album Rumors.

These drums are works of art, but they are still a drum that needs to be played, as Mick explains in the interview that follows.  In addition to this simple fact, we also take the time to discuss what is was like working with DW on the project, the album Rumors, what is next for Fleetwood Mac and the charity that a  portion of the proceeds for the Rumors Icon Drum will be donated to.

Learn more about DW and the Rumors Drum here: http://dwdrums.com/limited/#MFicon

Jeb: There is a Mick Fleetwood Icon snare drum available now through DW Drums with the famous Rumors logo inlaid into it.  My first question is two part…  How did this Collector’s Series snare come to be?  Secondly, tell me about the charity which receives a portion of the proceeds… it has to do with the welfare of animals?

Mick: I’ve been with DW (Drum Workshop), and John Good is one of the owners of the company.  He is really a dear friend of mine and he’s been really supportive to me as a friend during certain times, during some crazy stuff over the years.  He’s not just a drum connected person.  We have a commune as people.  That having been said, I’ve been with the company a long time.  When I’m in L.A. I’m quite often inclined to come out and visit and say hello.  When we are getting ready to work, I’m out there quite often talking about what we are going to do on the road and things of that nature.

I’m not sure how long the Icon Snare Drum programs have been going on, but I remember being out there years ago and I saw the Queen drum from the guy in Queen and Pink Floyd had a beautiful snare drum and a few others, of course I can’t remember off the top of my head.  I just would sort of salivate and look at these beautiful drums.  The craftsmen would want to show their stuff off and John would tell me to have a look and to make them feel good about what they are doing and to support the system out there.  It is always intriguing to me and always an education for me, personally.  I was always like, “Wow, I wish I could have one like that.”  I kept my mouth shut most of the time.

One day, about a year ago, or maybe a little less than a year ago, John had been coming in and off the radar and it just never got done.  It was not my prerogative to push it.  John called me and said, “I’ve sort of took the bull by the horns and we are going to do this Rumors snare drum.  I hope it is okay with the band.”  I said, “Well, sure it will be.  Why wouldn’t it be?”  He said, “I’ve put a lot of work into it without really asking whether it is all going to be okay with the photographer that did the original picture.”  He went with it and came up with a prototype which was just stunning.

I went out there… Stevie loved it and was ready to support the program when and if it got going, which it is now.  It is done and it is out.  That is how it happened, really.  It was just that John had always wanted to do it but for some reason we didn’t get around to doing it.  He just said, “Shit, I’m doing it.  I hope you love it.”  I didn’t know about the design until he told me about it.  He sent me this picture—I can’t remember if I went out there or I got pictures to start with, but I told him, “Dude, it is unbelievable.  It is gorgeous.”  Have you seen one?

Mick: Then how could you not love it?  That is how it happened.  The program… all of these drums in their various ways represent different charities, which I was well aware of.  I chose my charity to honor the mother of my twins.  I help her out.  Her name is Lynn Fleetwood, who is my ex-partner.  That was the focus.

We have a gallery here under my restaurant.  We run an onward going charity drive for her photography for elephants and stuff.  I associated all of the proceeds through DW to support that.  This works with many charities that work with elephants and rhinos that are all but extinct… as well as other animals.  People don’t realize there are only two white tigers left on this planet.  They are guarded 24/7 and they are unsuccessful so far trying to breed them.  They are standing by facing the reality that they will soon fall off the face of the earth and be no more.

Everyone doesn’t get it, but there are hundreds of thousands of elephants in Africa, but at the rate they are killing them now there will be no elephants left in twelve years.  When I became aware of that, I became more educated to the specifics when I was around someone who was really involved, which would be Lynn.  It is very daunting and incredibly sad.  They can’t do anything about it.  They need to be represented, meaning the animals and the wildlife.

It is a huge reminder of a whole lot of other issues.  Things can be done by human beings in the way that they behave to help themselves and to help the situations.  The situations become clearer the more you learn about them and then can do something about it.  It is a massive wakeup call that helps us focus.  It is also a reminder that there are things… me included… where you find yourself not doing enough and turning away from stuff.

Any little reminder and help with that, which this most certainly is, is super cool and a reminder, actually, with DW… they have loads of greats programs.  They have an online radio show that sees them interviewing people and they are always usually nurturing young talent.  People who need a push-start to get going or inspiration or mentoring… they are very much into that as they go along.  They’ve really always done that.  This is a reminder of how cool the folks are at DW, as people.  They run DW.  It is a family.  They are not jaded at all.  In England they have a phrase… they are like pigs in shit.  They love what they are doing.  A more polite phrase would be that they are like kids in a toy shop.  They are always pushing the envelopes and trying out new things.