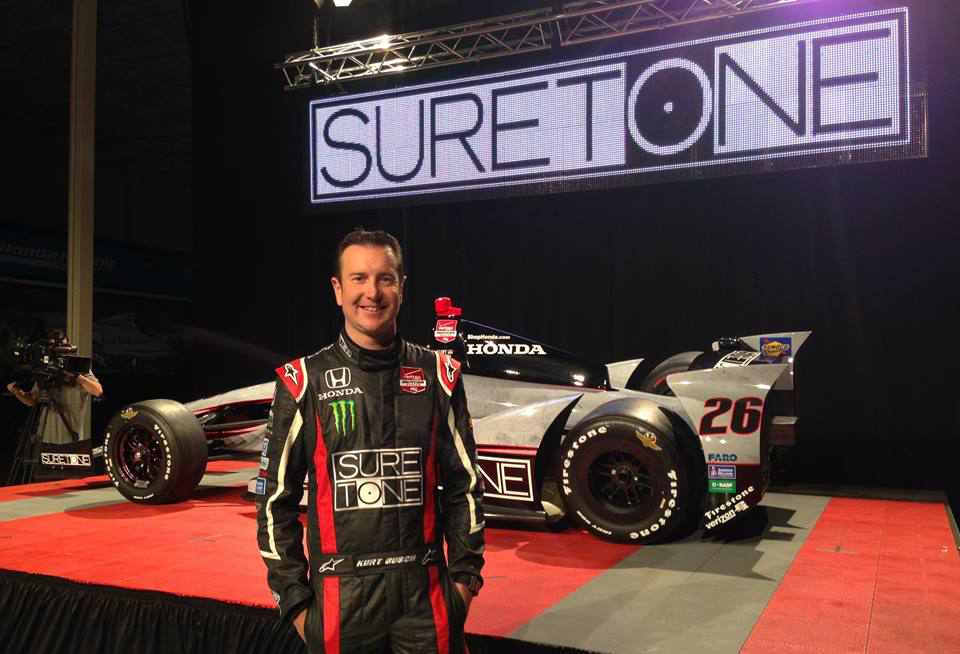 Suretone  Entertainment to Serve as Sponsor for Busch’s No. 26 Honda !!

INDIANAPOLIS (April 28, 2014) – Andretti Autosport unveiled today the Indy car in which, in just a few short weeks, Kurt Busch will make his first career Indianapolis 500 qualifying attempt. Busch will pilot the No. 26 Suretone Honda as he endeavors to become only the fourth driver in history to contest the “Double” – competing in IndyCar’s historic Indianapolis 500 and NASCAR’s 600-mile race in the same day.

“It’s an exciting day,” Busch said. “Reality is setting in that this is real and it’s go time. For me, it’s a dream come true, but the kid in a candy store moment is all behind me. Now it’s the focus of practice time and settling in with Andretti Autosport. Just to have Andretti Autosport and to have Michael (Andretti) himself involved, this is the right way to do things. Their team experience will help lead my inexperience.”

Suretone was founded in 2006 by Jordan Schur as Suretone Records after his successful tenure of almost a decade as President of Geffen Records at Universal Music Group where he merged the original Geffen Records with MCA Records and Dreamworks Records while working with some of the world’s most successful artists ranging from Nirvana, Guns and Roses, Snoop Dogg, Mary J Blige and Blink 182 to name a few and generating over 2B in sales. Schur started his career in music with his original company Flip Records where he sold over 70M records launching artists such as Limp Bizkit and Staind. Suretone Entertainment has since expanded into a broader company over the last 8 years that includes film development, financing and production, as well as music artist management, along with its original record company history where artists such as The Cure, Weezer, Chris Cornell, Angels and Airwaves, and Shwayze all found great success.

Suretone management roster clients currently include Fleetwood Mac, Lonestar, India.Arie, and ZZ Top, as the roster is overseen by Carl Stubner who joined the company with Schur as Co-Chairman after departing from his previous position as CEO of Sanctuary Music Group Worldwide in partnership with Universal Music Group where Stubner spearheaded great success for his roster of artists that included many of the world’s most successful acts. Suretone Pictures, founded in 2012, has released several films including last summer’s Pawn Shop Chronicles which starred Paul Walker in one of his last films before his unfortunate passing, as well as Elijah Wood, Brendan Fraser, Matt Dillon and others. Suretone Pictures has a slate of films in development and production including the upcoming Five Against A Bullet in partnership with Sony/Columbia Pictures, as well as Revenge Wedding in association with Lionsgate, and with whom Schur previously made films such as the much heralded Warrior which garnered an Academy Award nomination and Rapturepalooza. Suretone recently partnered with Cinsay – the world’s largest video ecommerce company – to create Suretone Live. Suretone Live endeavors to stream music concerts and various music related content on Cinsay’s patented global platform in every country worldwide, transacting in all currencies and languages.

“We are honored to have Suretone Entertainment stand with Andretti Autosport and Kurt Busch in this historic event as Kurt enters his first Indianapolis 500 qualifying run, as well as attempts to become only the fourth driver in motorsport history to contest the ‘Double’,” said Suretone Entertainment Chairman Jordan Shur. “As Kurt moves towards his goal to drive in the Indy 500 and NASCAR’s 600-mile race on the same day, Suretone takes great pride to partner with Andretti Autosport as we support Kurt in his incredible endeavor.”

What lies in front of Busch is a grueling challenge, not only on the race day itself – scheduled for Sunday, May 25th when Busch will race 1,100 miles in two races, in two cities, in two totally different cars – but in practicing and qualifying his Andretti Autosport Indy car in addition to competing in three (3) NASCAR race weekends around Indianapolis 500 activities. The 35-year old American will start the two-week Indy 500 stretch in Indianapolis on May 11th, fresh from the NASCAR race in Kansas. After spending the week testing the Honda-powered Indy car, Busch will log some serious air miles traveling between Indianapolis and Charlotte so he can qualify for the 500-mile race and practice and qualify for the NASCAR All-Star race and that Series’ 600-mile race. In total, Busch will likely make more than ten (10) trips between the cities – the most important and time sensitive being race day. Race day will place Busch in Indianapolis in the morning for the noon ET start time of the Indianapolis 500 before he makes the trip to Charlotte for the 6 p.m. ET green flag.

Kurt Busch breaking in the rubber!!